The Liskeard Storytelling Cafe and Strong Words Storytelling Club, a jolly combined group of yarnspinners in Cornwall, has invited me to be their featured teller on Zoom this Thursday, 23 September, at 7.30 pm British/Irish time. I’ll tell one longish Ulster story from the North of Ireland, one longish all-Ireland, and a short one or two if time allows.

The Sidhe lord Midir meets immortal Étaín, they fall in love and get married and live happily – for a time. The trouble starts when he takes her home after the honeymoon, and his first wife meets her. Then things get complicated over the next thousand years. Magic, mayhem, romance, shape-changing and shape-shifting, lust*, jealousy, and vengeance, with a bitter twist* at the end.

Starring the great hero Cúchulainn and featuring the arch-villain Bricriu, the Irish counterpart of the malevolent Norse trickster Loki. Ulster warriors Cúchulainn, Conal Cearnach and Laoghaire Buadach compete for the champion’s portion – the finest cut of meat – at feasts and undergo a series of trials to determine who is most deserving. Language and literature experts generally agree that this story is the origin of the 14th-century Sir Gawain and the Green Knight.

To register go to https://www.strongwords.org.uk/events/

A World of Tricksters and Hellhounds and Hero Horses: Beasts of Myth and Legend are available in ebook and paperback formats.

A World of Tricksters
ebook
https://www.amazon.com/dp/B086M2Y1WV

Details for Tricksters at —
https://mazgeenlegendary.wordpress.com/a-world-of-tricksters/

Details for Hellhounds at —
https://mazgeenlegendary.wordpress.com/hellhounds-and-hero-horses-beasts-of-myth-and-legend/

Irish Storytelling in the North of Spain, March-April 2019

27 March at the Official Schools of Languages in Laredo and Castro Urdiales in Cantabria is the only date so far.

Itinerary at Information at http://www.richardmarsh.ie/storyteller.htm

If you see ads here, they are not my doing. I don’t get paid for them, and I’d have to pay WordPress to keep them off. 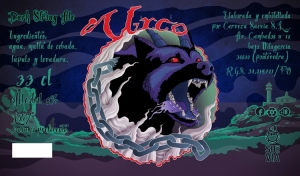 The urco, from the Latin orcus meaning the Underworld, is a presage of death. The Irish púca, which is also an unusually large black dog with fiery red eyes, is casually accepted as a neighbourhood pet, except when it’s a warning of danger – a sort of presage of an avoidable death.

When I was in Viveiro in Galicia to tell Irish stories in schools in 2017, I posted this picture here so I could conveniently show the students a definitive image of their native hellhound to accompany my tales of the púca, for which I don’t have any suitable illustrations.

Urcos and púcas have their own chapters in Hellhounds and Hero Horses: Beasts of Myth and Legend, along with Black Dogs (who are not urcos or púcas) and Ordinary and Extraordinary Real Dogs.

Among the late Desmond Kinney’s mosaic murals are the 1974 Setanta or Táin Wall (it’s the banner above; see that page on this blog) and the 1987 Sweeney Astray / Mad Sweeney (see the “Buile Shuibhne mural destroyed” entry on this post below). His son and daughters, Nicholas, Clare and Maeve, continue his work as Kinney Design in Belfast. Their most recent piece depicts Niamh enticing Oisín to go with her to Tír na nÓg, the Land of Youth. It was installed recently in MISA (Mercer Institute for Successful Ageing) House at St James’s Hospital in Dublin. It’s in an airy, well-lit open space that is not strictly speaking open to the public, so if you don’t have grey hair or wrinkles you might have to lie about your age or pretend you’re just looking for the toilet. Photographs are not encouraged. I got special permission from the hospital to take these, and they are posted here with the encouragement of the artists. 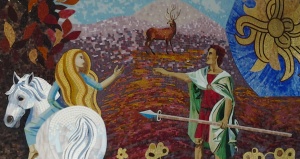 MISA House is not signposted in the hospital grounds. You have to go in the main entrance, and there you will find signs pointing the way.

It was a draw, and Paddy Power felt that since neither team played brilliantly bettors deserved a refund in the form of a free bet. Odds on Mayo to win have been reduced to 5-2 for the rematch on 1 October. Price for another draw: 9-1.

Croke Park in Dublin will be full to capacity — 82,000 — tomorrow, 18 September, for the Dublin-Mayo Gaelic football final.  Many of us who are not regular fans will be interested in the result. Will Mayo finally lay a 65-year-old curse and win? Bookmaker Paddy Power doesn’t think so. He has Mayo at 10-3 and Dublin at 4-11. Draw 10-1.

Everyone knows about the curse. Mayo won the final in 1951. On their way back home from Dublin they were passing through Foxford in County Mayo (alternatively, Tarmonbarry in County Roscommon) when they encountered a funeral. It is said that they didn’t show sufficient respect to the deceased, and a local priest cursed the team: they would never again win a final until all the men on that 1951 team were dead. Two are still living.

It is believed that the most powerful curses are those of a widow and a priest.

Mysteriously, the current parish priest in Foxford says he can not only find no record of a curse, the parish records contain no record of any funeral in 1951. “From around 1949 until 1952 there are no records at all of the deaths in the parish.”

A Myth and Legend Spectacular

When Aron and Sorcha Hegarty began their Irish myth and legend Candlelit Tales sessions at the Stag’s Head pub in Dublin nearly two years ago, the dozen or so people who turned up seemed to be mainly storytellers, confirmed story listeners and a few independent researchers in the field, curious to see how the stories might come to life off the page. With each more or less monthly session during the following year, the audience grew to full house, then standing room only, and now you need to join the queue early to be assured of a square foot of floor space. Why are the sessions so popular? The quality of the centuries-old stories is a given, but Aron and Sorcha started good and then got better and better.

The makeup of the audience seems to have changed since the beginning. At first, the interest was focused on those complex and inter-woven myths and legends that are often left out of contemporary Irish storytelling in favour of the simpler, family friendly fare of folk tales. The folk tales are good, but they tend to be localised international migratory stories that are common to many world cultures. It’s the native myths and legends that help to define a particular society. The folk tales show how all humans are the same. The legends show how every society is different. Sorcha and Aron were giving largely forgotten Irish legends back to the Irish people, and they resonated with the listeners.

Then came a change over the past year. Some people were coming to the sessions at least as much for the entertainment as for the content, and this was quite clear at the multi-arts production of The Dream of Eithlinn, fittingly at the 17th-century Smock Alley Theatre, which was founded at a time when there were still people living who had known Shakespeare. The Globe audiences were not students of English literature; they attended the plays for entertainment: for the tragic dramas, the raucous comedies, the politically daring histories, the rejuvenated myths and legends, the absurd clowning and the bawdy jokes and double-entendre puns.

The Dream of Eithlinn, about the mythological hero Lugh of the Long Hand – Lugh the Multi-talented – is a dazzling display of story, song, instrumental music and dance. Candlelit regulars were surprised to discover that Catríona Loughlin (filling in this summer for the absent Sorcha), who has proved to be a captivating storyteller, also has a bewitching singing voice. Maybe in future she’ll add a bit more harp accompaniment.

Aron’s intensity assures the audience’s attention, and his light asides keep the tension from getting too heavy. The dancing, headed by Aisling McCormick, was inventive and integrated smoothly with the narrative and enhanced it.

In my (apparently minority) opinion, instrumental music behind storytelling is nearly always counterproductive: it distracts from the story and too often obscures words. But the music in this show – mandolin, acoustic guitar, electric guitar, fiddle, accordion, drums – was very much a necessary element.

Experienced teachers know that the classroom is a theatre, and the teacher is an actor whose job is first to entertain the students, and then to introduce curriculum subjects while the students still think they’re being entertained, before they realise they’re being educated. Something like this seems to be happening with Candlelit Tales

Bring your own seat cushion. The wooden benches get harder with each minute.

I went to all nine performances. Here are the highlights.
Click on photos to enlarge. 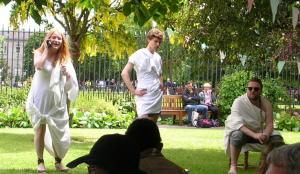 Homer’s Odyssey
Penelope is leaving one of some 3000 voice messages to Odysseus asking when he is coming home. Blind Homer seated on right. 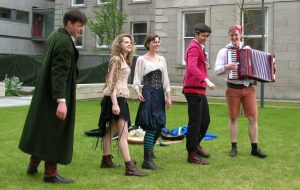 The Unquiet Hour: A Tale of Fairies
Too much talk, too little action, not much story, but salvageable with heavy editing, distilling 50 minutes into 15, or maybe 20 with the addition of humour. Some clever, poetic lines but only two laughs. One: “You are the most beautiful person in the world.” “How do you know?” “I checked.” The gold-clad actress has marvelous facial expressions. 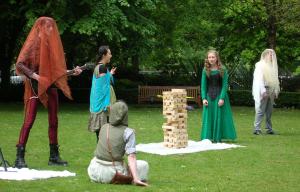 The Brown Bull of Cooley
A slapstick Cliff’s Notes summary of the great Irish epic the Cattle Raid of Cooley. The rock guitar player on the left is the Brown Bull, the white-draped figure on the right is an impressive opera singer as the White-horned Bull. In the epic they fight and kill each other. Here they duel musically. Young kids loved it. 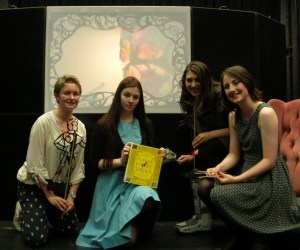 Tales from the Shadowlands: Fairytales
One at a time, these four women sat in a chair in semi-darkness next to the screen and told a story with a book on their lap (why the book?), while the others manipulated shadow figures behind the screen. The Juniper Tree is on the screen here. The Happy Prince figure stands out against the white blouse on the left. The stories were The Red Shoes (Hans Christian Andersen), The Happy Prince (Oscar Wilde, but they changed the angels at the end of the story to fairies), The Juniper Tree (Grimm), and William the Curious, Knight of the Water Lilies (Charles Santore). The tellers were nearly invisible, giving precedence to the story. Simple, straightforward, cleverly done.

Some of the stories are based on works of public art and who or what they represent — Oscar Wilde, Molly Malone, Éire with the harp, for example. We visit the Setanta Wall, shown at the top of this page, for stories about the great mythological hero Cúchulainn. Dublin’s newest sculpture, the Selfish Giant, by Lithuanian wood sculptor Sarunas Gimbutis, has pride of place in a new playground in Merrion Square behind the statue of Oscar Wilde, author of “The Selfish Giant”.

Finn’s Hotel, the fading sign still visible high on the side of the red-brick building that is no longer a hotel, was where James Joyce met his future wife, Nora Barnacle, and got the idea for Finnegans Wake.

One of our stops (if we can fit it in; the bank closes at 4.00) is the House of Lords in the old Parliament building, now the Bank of Ireland. The coat of arms of Derry on a tapestry depicting the Lifting of the Siege shows a seated skeleton, for which there is a grisly story.

The short video at the bottom of this post will give you a taste of the 1.5-hour tour. It was part of a proposed AudioTrip app that never materialised. 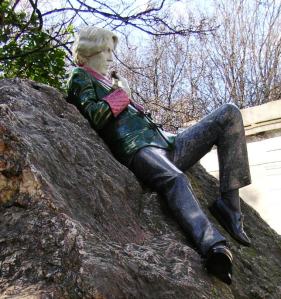 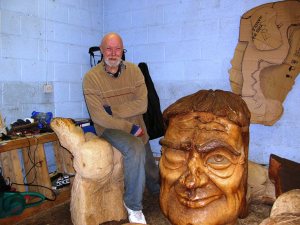 Sculptor Sarunas Gimbutis with the Selfish Giant in progress 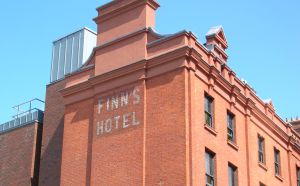 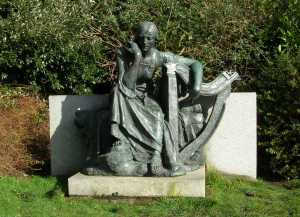