The Lovers of Teruel (Spain)

Heaven, which kept us apart in life, will unite us in the tomb.
(from Los Amantes de Teruel, Juan Eugenio de Hartzenbusch, 1837)

You are a continual hope, consolation and example,
For where there is an Isabel, there will always be a Diego.
(from Himno a los Amantes de Teruel, Carlos Luís de la Vega, 1977)

The visitor who arrives in Teruel by train, upon leaving the station to climb the neomudéjar (Christian-Islamic art style, 1921) Escalinata to the old part of the town, is confronted by a large relief sculpture (also 1921) depicting a young woman bending over a dead youth. These are the Lovers of Teruel, whose tragic story has been in oral tradition since shortly after their deaths in 1217 and has frequently been retold since the 16th century in music, art, drama, dance and poetry.

The ancient escutcheon of the de Marcillas had long been respected, but the family had fallen on hard times. The de Seguras were newly rich landowners. Isabel de Segura and Diego Martínez de Marcilla played together as children, and as they grew older their friendship gradually turned to love. To them it seemed as natural as breathing that they would some day marry, but their romantic plans were socially improbable at best. Not only was the Marcilla family impoverished, Diego was the younger son, and any inheritance would go to his brother. Isabel’s father strenuously opposed their relationship, and he forbade her to see Diego. His daughter’s marriage should increase his family’s wealth, not diminish it.

The lovers met in secret and discussed what was to be done. The only way for Diego to make enough money to qualify as a suitor was to go away and seek his fortune. In those days, a worthy warrior could quickly acquire wealth and position through plunder and captured property. They came to an agreement: Diego would join the Christian army then assembling in Barcelona to fight against the Moors. If he failed to return in five years, Isabel was to give him up for dead and marry another. This coincided with a vow Isabel had made: to keep her virginity until she reached the age of twenty, five years and a day from then. They parted with heavy hearts, relieved only by the fact that Isabel’s father had reluctantly agreed to wait for five years before he would force her to marry a man of his choice.

Diego joined the army of Pedro II of Aragón and distinguished himself in the famous battle of Las Navas de Tolosa in 1212. After Pedro’s death the following year, Diego took part in an invasion of North Africa. He proved to be a fine soldier and quickly won the respect of his comrades and the approval of the officers. Success followed success, until eventually he won his officer’s insignia and was awarded a knighthood for his valour. He was also granted extensive properties as spoils of war, and he inherited the estate of a French comrade whose life he had saved. Diego was suddenly a wealthy man with a title.

Meanwhile, Isabel waited in vain for some word from him. Some say he never wrote, wishing to surprise her with a triumphal return. But more say his letters, which might have offered her some hope with confirmation that he was still alive and reports of his steady advancement, were intercepted by Isabel’s parents, who planned to marry her to a wealthy friend for financial benefit as soon as the five-year period expired. This was Don Rodrigo de Azagra, a retired knight who had recently moved into neighbouring Albarracín. They also told Isabel falsely that they had received news that Diego had been killed in battle.

As soon as he was confirmed in his new fortune Diego set off for home to bring Isabel the good news. He began his journey in good time, though with a close margin, to arrive less than five years after he had left Teruel, but his ship was delayed by a storm. After landing in Valencia, he received word along the road that Isabel was to be married on the day that the agreed waiting period expired, and he made the greatest haste, never resting, and pausing only to change horses. But when he arrived in the city late in the evening, he was greeted by the sight of public festivities in honour of the wedding that had taken place that morning.

Diego went into Isabel’s house and mingled unrecognised with the invited guests. Eventually the newly married couple took their leave in preparation to withdraw upstairs to the wedding chamber. Diego made his way secretly to the chamber and concealed himself under the bed, determined to prevent the consummation of the marriage.

As Isabel got into bed to join Rodrigo, Diego caught her by the hand. Gasping with surprise, she immediately recognised the hand as Diego’s. Rodrigo asked her why she had gasped.

“I suddenly remembered a vow I made when I was fifteen – to remain a virgin until I had reached the age of twenty. I won’t be twenty until tomorrow, so I beg you not to ask me to do what a man expects of his bride on their wedding night.”

Rodrigo reluctantly granted her request, and he soon fell asleep. Then Isabel cautiously got out of bed, Diego slid out from under it, and they moved into an alcove to talk. Diego explained about the letters he had written and why he had arrived late, and she told him that the letters had been kept from her and how her father had told her that Diego was dead and insisted that she marry as soon as the five-year period had ended.

“I accept that it is God’s will that we not be united in this life,” Diego said, “but at least give me a kiss or I will die.”

“I wish that things were otherwise, my love. I understand your grief and pain because I feel the same emotions. But now that I am married, I no longer belong to myself, and I cannot give to you what belongs to my husband, not even a kiss.”

For the love he had for her, Diego would not force her to do what she felt was improper. He turned to leave, stopped suddenly, and fell dead to the floor. Isabel threw herself onto his body and wept so loudly that Rodrigo woke up, asking what was wrong.

Isabel went to him before he could see Diego’s corpse and related the events of her and Diego’s relationship, only changing the names.

“I dreamed that a young friend of mine had agreed to marry her lover …” she began, and when she reached the present “… he arrived too late to prevent the marriage. He asked her to at least give him a kiss so that he would not die of grief, but she refused because she felt it would not be right, and then he died. That’s why I was crying. Tell me, do you think she did the right thing?”

Rodrigo laughed and said, “She was very silly and prudish and overly cruel to one she loved, not to give him one kiss when he was alive to save his life, when she would kiss him a thousand times in her mind after he died.”

She then showed him Diego’s body, saying, “I am that silly and prudish woman, but I have kept my honour.”

When Rodrigo recovered from his astonishment, they discussed what they should do. They realised that it would be legally awkward and socially scandalous for the body to be found in the bedroom, and Diego’s family might want revenge, so they decided to take the corpse out and leave it in the doorway of Diego’s family’s house.

Came the morning, and the discovery of the dead youth caused grief in his family and consternation among the townspeople. The funeral was set for the following day.

At the Mass in the church of San Pedro, Isabel’s family, the de Seguras, as one of the leading families in the town, were seated in the front pew near the open casket. Isabel, her head covered with a black veil of mourning, sat through the ceremony with her pale face buried in her hands. Then, before anyone realised what she was doing, she stood and walked to the casket, threw back her veil, and placed a kiss on Diego’s bloodless lips so forcefully that the sound could be heard throughout the church, and she fell onto his body with her arms around him. Her shocked parents rushed to her side to pull her away, only to discover that she was dead.

Most versions of the story imply or state that she died of grief, but one, the Papel de San Pedro, which was discovered in the archives of the church of San Pedro in 1806, suggests suicide. During the procession to the church, Isabel speaks to Diego in her mind:

“I will live no longer. I will follow your example and die, husband, for you deserve that name more than the second one. I consider the devotion you showed me to be a pact until your death, and I want to repay that with my death, so that fame will make us one in the tomb, and the story of our love will immortalise us. Wait, Diego, until I can come and give you what I ungratefully denied you, for if poison and dagger fail me, grief will suffice to give me a sure death. You will see me within an hour, and I will be very happy if one gravestone will cover us both, for our souls burn with a pure and chaste love.”

All agreed – both families, the townspeople, local officials, even Rodrigo – that Isabel and Diego should be buried together as husband and wife. Their alabaster figures now lie on separate coffins in the church of San Pedro, their hands stretched toward each other without quite touching. 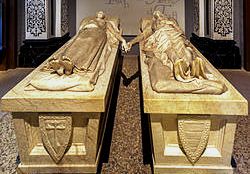 Each February 14, Teruel celebrates its best-known story with a spectacular re-enactment of the dramatic events in the streets of the town. Any engaged couple named Isabel and Diego may be married during the festival.

Anything below this line has been added by WordPress.