The show was recorded for Dublin Community Television (DCTV) in July 2013. We were told it would be broadcast some time in 2014. Here is a photo of all the tellers. Some of the performances are available here. Note that the names are wrong on Deirdre’s and Gráinne’s videos.

I have a few stories on the website Our Wicklow Heritage under Places: Baltinglass: Saint Bridget’s Head Stone, Crossoona Rath (with an ogam inscription) and The Gates of Heaven.

A great giant came to Tara from a foreign land and demanded tribute or a fight with a hundred men from third-century high king Cormac mac Airt. He got three fights and killed three hundred of Cormac’s warriors. Cormac called on Fionn mac Cumhaill and the Fianna. The giant killed a hundred of the Fianna. Fionn asked Goll mac Morna if he would care to take on the giant in exchange for a third part of the spoils and a bonus, and Goll agreed. They fought all day, and when they stopped at nightfall, Fionn came to the giant in the guise of a storyteller and offered to tell him stories with the condition that he would not fall asleep while he was telling. The giant agreed, and Fionn yarned all night. The giant fought Goll again the next day, Fionn kept him awake all night again, and the same the following day and night, so that finally the giant was so tired he lost half his strength, and Goll killed him.
(from the 16th-century Book of Howth, included in my Meath Folk Tales, 2013, The History Press Ireland)

From time to time to get away from the crowds at Glendalough, Saint Kevin would walk twelve miles west over the hills via the Wicklow Gap to the village now known as Hollywood, where he stayed by himself in a cave called Kevin’s Bed (not to be confused with the cave in Glendalough also called Kevin’s Bed). Kevin probably discovered this cave when he went to that area to start a new church. That time, he was carried in a litter by servants. When they reached the village then called Cnoc Rua (Red Hill), from the colour of the summer vegetation on the hill south of the village, they found their way blocked by a wood, and they stopped.

“Why did you stop?” said Kevin.

“There are trees in the way,” they said.

They walked toward the wood, and the trees fell down in front of them to make a road. Kevin blessed the wood and promised “hell and a short life to any one who should burn either green wood or dry from this wood till doom”. That is how the village got its name, Holy Wood (“Sanctum Nemus” or “Sanctus Boscus” or “Seinbois” in medieval records), which by the 16th century became Hollywood. (A local man, Matthew Guirke, was responsible for naming Hollywood, California.) It is also called Cillín Chaoibhín in Irish, which means “Kevin’s Chapel”.

A hermit who lived in the cave in the 1960s told the children he was Saint Kevin, and they believed him. He left an inscription painted on the wall: “Help me Lord to find my true home.” 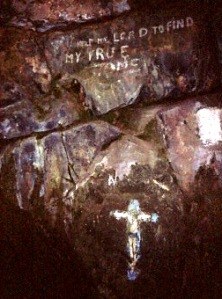 Help me Lord to find my true home.

This is the exterior of the cave, with friend Elvira. 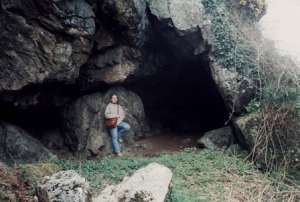 From Tales of the Wicklow Hills.

At the foot of Mount Snowdon in North Wales is a village called Beddgelert, named supposedly for the saint whose grave (bedd) is nearby. But the popular version of the story is a localised variant of an international folk tale told on this plaque. Click on the photo to enlarge.

This is the grave. The railing around it was the most convenient place to park my bicycle.

Ecuadorean storyteller statue – looking for information about him

This wooden carving was brought to Ireland some years ago from Ecuador. It is said to be a storyteller. What is the book for? Did he read stories? What are the containers on his back and in his right hand?

The original Iron Age La Tene-style Killycluggin Stone, now in the County Cavan Museum in Ballyjamesduff, is believed to be the idol known as Cenn Crúaich or Crom Crúaich, which could mean “bloody head” but I think means “head of a [stylized] stack of corn / rick of hay”. Hay is saved in County Cavan in exactly this form and size. Crom Crúaich was the harvest-god stone idol destroyed by Saint Patrick in Mag Slécht (the Plain of Slaughter).

“Here used to stand a lofty idol, that saw many a fight, whose name was the Cromm Cruaich; it caused every tribe to live without peace. … Round Cromm Cruaich there the hosts did obeisance: though it brought them under mortal shame, the name cleaves to the mighty plain [Mag Slécht = Plain of Prostrations, according to this interpretation]. … Ranged in ranks stood idols of stone four times three; to beguile the hosts grievously the figure of the Cromm was formed of gold.” From the c. 14th-century Metrical Dindshenchas (Lore of Placenames) at The Corpus of Electronic Texts (CELT) under Mag Slecht.

Some well-informed locals say the Killycluggin Stone is Crom Crúaich; others say Crom Crúaich is the stone circle — c. 20m internal diameter, consisting of 15 mostly collapsed stones — about 300m from the replica. The Stone was deliberately buried in two pieces next to the stone circle in the distant past. “Crom” in its sense of “bending” presumably refers to the circle, but it could also apply to the Stone itself with the meaning of “hunched/crouched”. One part of the Stone was discovered in 1921 (Journal of the Royal Society of Antiquaries 52, 1922) when it was struck by a plough. The other was found in 1952 (JRSAI 82, 1954). The Stone bears the signs of having been dealt repeated heavy blows. Saint Patrick “plied upon the Cromm a sledge from top to toe; with no paltry prowess he ousted the strengthless goblin that stood here.” (Met. Dind.) Barry Raftery, who excavated the site in 1974, discussed the finds in the Ulster Journal of Archaeology, Vol. 41, 1978.

The Stone was probably originally situated in the centre of the circle or at a distance from the entrance stones as an outlier. Its burial place was not where one would expect to find such a stone. The conflicting dates of the Bronze Age circle and the Iron Age La Tene-style Killycluggin Stone confuse the issue, but the two informed locals I talked to thought the Iron Age people simply installed their idol in the existing circle.

The Stone is in the townland of Killycluggin, about 3 miles southwest of Ballyconnell. “Kill” in an Irish place name often means “church” (cill), but here probably comes from coill, “woods”. Cloigheann means “head”.

Some have argued that the Killycluggin Stone is phallic (using what yardstick, so to speak, I can’t imagine) and have compared it to the Lia Fáil on the Hill of Tara. As you can see, there is no similarity.

Lia Fáil on the Hill of Tara

This video is from a Milk & Cookies session in Dublin, 2010. In support of the veracity, or at least verisimilitude, of this yarn, here are exterior and interior photos of the cottage I lived in at the time near Avoca, County Wicklow. 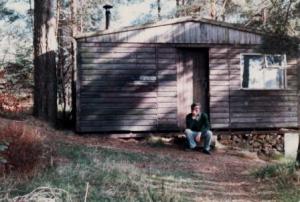 Also, to prove that at least part of the story is factual, here are the Bell Rock and the Spink, from my book Tales of the Wicklow Hills (2007), which includes this tale.

You can see 24 other videos from Milk & Cookies here.

Saint Patrick went to Tara to cure Lugaid son of Laeghaire son of Niall of the Nine Hostages of a “trouble”. Lugaid took a large piece of bread and swallowed it and it stuck in his throat. Patrick gave him milk to drink, but it made the bread swell up, and it choked Lugaid to death.

Patrick prayed “crosfigell” (kneeling with his arms spread in the form of a cross) for three days and three nights. Saint Michael the Archangel appeared and restored Lugaid to life. Patrick commanded that everyone should set aside a tenth portion of food for the King of the Clouds and a morsel for Michael. 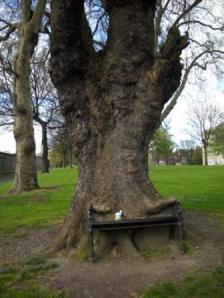 This tree that ate a steel bench is in the grounds of the 19th-century King’s Inns, Dublin, a college for barristers founded in 1541 by Henry VIII. It’s next to the vehicle gate on Constitution Hill.

(King’s Inns is frequently used as a location for period films. In fact, Albert Nobbs, a 19th-century drama starring Glenn Close in the title role, was shooting there today, 6 January 2011. I was an extra in the film and was in a scene with my favourite Irish actress, Bronagh Gallagher, and the enchanting Mia Wasikowska. Glenn Close smiled at me. The director was Rodrigo García, son of my favourite novelist, Gabriel García Márquez.)

The tiny figure seated on the bench is Flat Stanley, who my granddaughter Rowan sent to me in 2009 for a class project. I released him from the envelope and unfolded him and took him around Dublin to meet people and see the sights. I took photos of his adventures and sent them to Rowan.

In the book written about him in 1964 by Jeff Brown, Stanley was flattened when a bulletin board fell off the wall onto him. Unfortunately, the week before he arrived in Dublin a similar thing really happened to a man in a store and killed him. This meant that Stanley’s reception was a bit chilly.