Niamh is well known in the world of Irish traditional music. She has toured with Riverdance, as a solo artiste and with her own band, and has recorded with the Chieftains and with Galician gaitero (bagpipes player) Carlos Nuñez. I met her at the Pan Celtic Festival in Killarney, Co. Kerry, in 1983, when her father, Eoin, helped me find a darkroom to develop the black & white photos I took at the Festival for people who wanted copies. The colour photos of her and Timmy O’Sullivan are from the Under-12s Duet competition at the Fleadh Cheoil na hÉireann in 1985 in Listowel, Co. Kerry. 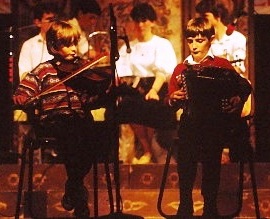 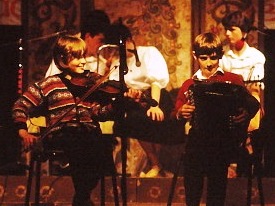 At a late-night session in a restaurant with horrible fluorescent lights, about 3 am, I caught Niamh “resting her eyes”. The flash woke her up, and she gave me a big grin. 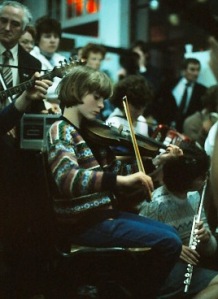 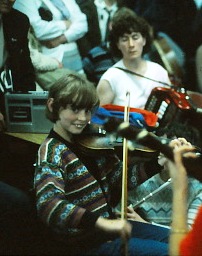 The O Carra family was playing on the street in Killarney during the Pan Celtic in 1983. Eoin is on the left in the group frames. I’m posting two halves of the contact sheet as a study in concentration, but also because I can’t find the negatives. Click on the contact sheets to enlarge. 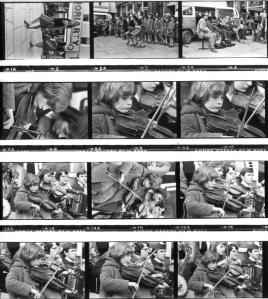 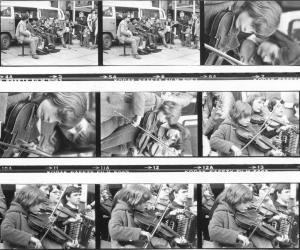 The late Séamus Creagh, a talented and charismatic fiddler from Westmeath, was playing for a small circle of admirers, including Niamh. During a lively tune, we were all tapping our feet, but Niamh was sitting with her legs crossed and swinging one foot in time to the music. The foot-swinging increased with the intensity of the tune, until her shoe came off and landed in the middle of the circle, much to her embarrassment. Séamus took it in good humour — probably saw it as a compliment. That was probably 1986, the year Séamus came first in the Pan Celtic International Fiddle competition.

For full information on Niamh, and to see how she has blossomed from cutey to beauty, go to her website.