A World of Tricksters 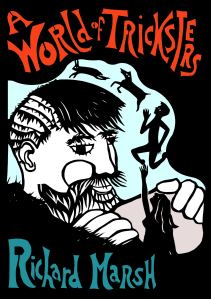 The figure of the trickster is a cultural universal which survives and thrives into the present, often telling us more about ourselves than about the characters in the stories. Ambivalence and ambiguity are the order of the day as the trickster emerges as hero and villain at one and the same time, providing a unique insight into the human psyche and into our deepest desires and fantasies.
(from the Foreword)

154 stories from 29 countries. Most are myths or folk tales; some are factual.

Stories about tricks are entertaining, but they carry a serious message for the young, weak, vulnerable, and socially disadvantaged: it is possible to overcome bullying, whether institutional or personal, or at least counter its effects.

This lesson is encoded in narratives for a good reason: “There are some areas of the mind which can only be reached with stories, because they penetrate deep into the subconscious, like ink dripped on to blotting paper” (Idries Shah).

Humans
Ameen and the Ghoul
The Birds of Cirencester
The Black Pig’s Dyke
Bopolûchî
O Ciprianillo: The Book of San Cipriano
Daniel O’Connell
Curran and the Innkeeper
King Matthias the Just
Digging for Treasure
The Doctor and Death
The Fairy Fort Is on Fire
The Father of Farts
Five Eggs
Nasruddin Hodja and His Cousins
The Inconstant Widow

San Martín Txiki and the Basajauns
Turning the Plaice
Two Pieces of Advice and an Empanada
White Pebble, Black Pebble
Who Owns the Bag of Silver?
Titanic Thompson
Dumb Kid
Miracle as a Trick of God
The Rebel and the Sergeant
A Bag of Irish Tricks
Cost-cutting
Trinity College
A Hare Coursing Stroke
Toss Byrne’s Stroke
A Rathnew Stroke
Bosco’s Stroke
Spading the Garden
How to Quit a Job
The Disappearing Parking Ticket Book
The Train in the Tunnel
A Trick Backfires

Richard Marsh’s A World of Tricksters is a good romp through all the facets of the trickster motif, from mythology to urban legend.

With occasional reference to Stith-Thompson’s index, Richard’s sources range from Petronius’ first century AD work, Satyricon, to his own personal recollections. Characters such as the mythical Native American Coyote to the twentieth century gambler Barney Curley fill the pages.

Think of this book as good bedtime reading. The stories are short and the laughs come quickly. Richard’s observations and dry humor add to the book’s enjoyment.

This book is a Storyteller’s delight. Trickster tales from around the world supplemented with rich notes, discussion of sources and informative introductions make this an exhaustive encyclopaedia to include in the Storyteller’s repertoire.

This book is a treasure trove of trickster stories from around the world and a great resource for teachers, tellers, and lovers of story.

Lost in another world, or rather worlds, I was taken away with Richard Marsh’s latest. A World of Tricksters is like a nice bottle of whiskey to be savored one, or two, delicious tastes at a time. Or go ahead and binge a little! Either way, you’ll find some familiar but mostly new stories of how cleverness and intelligence triumph.